The reason you have had no visits from me, no comments, no nuthin', is because my blog has been hacked. Compromised. (Thanks to the LOVELY  Theresa M. from Theresa's Tales for helping me out.) I have decided to change my password every day now. Oh, and my hubby fell off the roof of our house. He has arrived back home but has a lot of issues. Punctured lung, broken ribs and shoulder, etc.. The thing about the blog is this: I changed my password and right after I did that, it was hacked again. *sigh* I will start coming by today. As long as it will let me. Then tomorrow I will change my password again. And so it goes. Hugs and smooches everyone.
Posted by Robyn Campbell at 11:56 AM 29 comments: 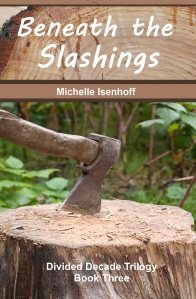 Beneath the Slashings is the third book in the totally bodacious trilogy Divided Decade. And may I say that the FIRST sentence in Beneath the Slashings  MADE MY MIND AND HEART SCREAM, "READ MORE!" Here it is for your pleasure.
Grace Nickerson hated surprises. Okay. Need I say more??  DOES THAT SENTENCE SCREAM, GIVE ME SOME BOOKY LOVE, or what?? Eh? There is a cover face-lift happening, people. The new cover is much better. I have posted it for your looking pleasure. > See it?
The other two books in the trilogy are The Candle Star and Broken Ladders. You MUST read these wonderful historical fiction books. Michelle is a beautiful woman and her writing is just right. Everything fits. Everything works. It all comes together with finesse.
Broken Ladders is dedicated to ALL those who fought in America's bloodiest war AND the families they left behind. That dedication struck me, which is why I wanted to include it in my post. I truly recommend that you buy all three books and anything else Michelle writes.
And to do that I urge you to travel the linkage:
Kindle
Paperback
Nook
Smashwords

Here's the Extended Description (From Smashwords)
Beneath the Slashings is the final book in Ms. Isenhoff’s Divided Decade Trilogy, which views the American Civil War from three different angles. But because they’re only loosely related, each book can be read independently.


The story begins with 12-year-old Grace Nickerson celebrating the end of the war. After four long years, Pa’s finally coming home! Grace is eager to move back to the family farm (from her aunt and uncle’s house) and resume a normal life. But then Pa’s letter comes in the mail–he’s sold the farm and taken a job in a lumber camp, and Grace and her twin brother, Sam, are to go with him.

Grace is devastated. She’s never been brave. “She wasn’t one to swing out over the creek on a hot summer day and drop blindly into a pool.” And her fear quickly turns to anger. When her tears and tantrums don’t change Pa’s mind, she stops speaking to him altogether.

In camp, Grace spends long hours working with Sam and Ivan, the surly Russian cook, but at least in the kitchen she’s safe from the lumberjacks. She’s seen them from the window. They’re rough, unkept, and terrifying. But slowly, with Sam’s help, she comes to understand they’re all missing home and recovering from loss, just like she is. Her fear begins to evaporate–until she learns one of them is trying to kill Pa.

This is more than a suspenseful adventure, it’s a little slice of history wrapped up in entertainment. Many returning Civil War vets really did look to the lumber camps for a fresh start. The setting is authentic and well-researched, and the colorful language of the logging camps is employed. The author even touches on the challenges that arose from so many new black freemen and the tragedy of diminishing Native American cultures. The years after the war were a time of uncertainty, rebuilding, and learning to live with changes. Isenhoff, with her distinctive prose, captures them beautifully. But mostly, this is a story of family and forgiveness.

My review, peeps!
I love Grace. She's full of spice and that's hard after all those years of war. She's had to learn about loss, regret, and sorrow.  I imagined her very real as I read this super fantastic 'kid growing up' story. I think coming of age is overused people and should be banned from our vocabulary. Anywho, Grace has a twin brother named Sam and they move with their pa to a logging camp. Can anyone say action? Conflict? This story has it all. And Grace is in the middle of it. I also liked Pa. He had some decisions to make after the war and whether or not we agree with them, he's a great character to write. This was a time of insecurity, especially for kids. So we fall in love with Grace because we understand her. She sparkles at times and at times she's very stubborn (but she sparkles even then). One thing is for sure, we feel in our hearts for her and for all those coming back from the civil war or any war and trying to rebuild their lives. I found that the historical parts of this story are spot-on. Michelle draws pictures in our minds that show us about life after. Now all that said, this is not a story for your ten-year-old. It does take place in a logging camp. Right?
Honorable mention to the characters Ivan and Fiddlesticks. Both very well written. I won't say anymore, lest I start blabbering about the end. (I have a tendency to want to tell you EVERYTHING) :-)

Here's the rest of the tour. It lasts the entire month of August. Go hang with these cool folks. 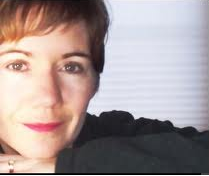 And here's her lovely face. >

Linkage on where to find this talented woman folks:
Michelle's house (Her website for those of you not up on THE lingo)
Michelle's second home (her blog)
Michelle's cabin where she tweets with the birdies (hehe)
Where we go to follow Michelle's toing and froing (Facebook)
Michelle's great reads at Goodreads
Watch her awesome trailers here peeps


Thanks for all your awesome support during the sickness and death of my beloved sis-in-law. You people are BEAUTIFUL man! Hugs and smooches.
Posted by Robyn Campbell at 12:06 AM 22 comments: