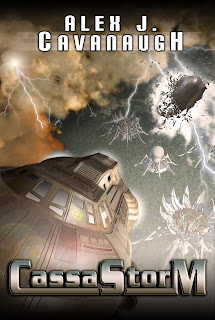 A storm gathers across the galaxy…

Byron thought he’d put the days of battle behind him. Commanding the Cassan base on Tgren, his only struggles are occasional rogue pirate raids and endless government bureaucracies. As a galaxy-wide war encroaches upon the desert planet, Byron’s ideal life is threatened and he’s caught between the Tgrens and the Cassans.

After enemy ships attack the desert planet, Byron discovers another battle within his own family. The declaration of war between all ten races triggers nightmares in his son, shaking Bassan to the core and threatening to destroy the boy’s mind.

Meanwhile the ancient alien ship is transmitting a code that might signal the end of all life in the galaxy. And the mysterious probe that almost destroyed Tgren twenty years ago could be on its way back. As his world begins to crumble, Byron suspects a connection. The storm is about to break, and Byron is caught in the middle…

Is that a great cover or what? I know what you're thinking. YOU GOTTA READ THIS BOOK! Me too. And in September we'll be able to do just that! :-)
Posted by Robyn Campbell at 3:00 AM 19 comments:

The Return of Phyllis, that Purty Groundhog Gal

You remember Phyllis, don'tcha? She is that groundhog that visited my farm last year. My pal, Susanna Leonard Hill's creation from two of her picture books, April Fool Phyllis and Punxsutawney Phyllis. It seems like Phyllis couldn't get enough of our NC farm so she returned on February 2nd. (She was fit to be tied when she realized that it was winter here too and there would be NO strawberries to pick.) 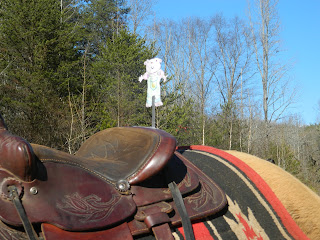 Anyway. I told her I needed six more weeks of winter. Did she deliver? I THINK NOT! She tried and tried, but could not see her shadow.

When we last left Phyllis she was a rodeo weather gal. Since she couldn't swim either (she was foot stompin' mad about that) she demanded a race. A horse race. Against MOI. Never one to shrink from a challenge I accepted her gauntlet. The catch? She insisted on riding my super fast palomino appaloosa, Mister Ed. (They kinda connected on her last visit.)
I chose Cloud. Our ever faithful Tennessee walking horse. Ivy joined in with her thoroughbred/dutch warm blood  jumper, Saber. Enjoy. :-) (Note from Phyll: Pay NO attention to that man running in front of Mr. Ed. Just remember. I won that race fair and square.) PSHAW! *wink*

(Note from Robyn: Pay NO attention to that man giving acting directions. We went over this and over this. That's my story and I'm sticking to it!)
Thanks to these my members of my family: hubby, Ivy, Ben (who filmed it), and Nic who handed the flowers to Phyll. Now I owe the entire bunch a pizza dinner.
Posted by Robyn Campbell at 5:10 PM 36 comments:

Hey peeps! I wanted to mention that Joyce Sweeney is giving away a chance for a picture book or first ten pages critique to one lucky writer. Check out the contest over at  the house of Mindy Alyse Weiss. Joyce has an upcoming class on Fiction Writing Essentials that sounds very interesting. Head over and visit her here.
Posted by Robyn Campbell at 9:45 AM 13 comments: