My Favorite Therapist and How She Helped Me + a Giveaway

I'm talking about THE CHARACTER THERAPIST, Jeannie Campbell. I've always been partial to her last name too. Wonder why.

Jeannie has this GREAT new website that she will use to help our MC's with all their nagging problems. If you've never used her, followed her, or otherwise supported her, get going NOW! Well, after you read how she helped me with Miller. (My character in my YA mystery.)

My question had to do with my MC's behavior after his mother's untimely death. I wanted to know if I had written him right. In other words, I had him making very unusual, uncharacteristic decisions. He was always goal oriented up to this point. Now he was skipping school, etc. Jeannie was spot on and the very thorough advice she gave me led to a new and exciting plot for the book. Things happened that I never anticipated. The book took on a new life and I truly believe it was because of the direction Jeannie gave me in her answer while I was on her couch. She mentioned that his goal of becoming a physician for his mother is divided by his desire to find the mother’s killer. Both goals involve his mother and doing something for her, but he can only choose one. These are the type books that keep readers turning. What will he decide? Make sure to include plenty of pressure from the school system administrators and teachers, threatening to take away his valedictorian status, which will in turn prevent him from getting into a good college, which won’t help him get into a good med school….see the angst? This advice plus added stuff about his aunt turned my story around. And she can help you too.

Isn't she GORGEOUS???? Hmm, lovely smile, Jeannie. Yanno? I'm shopping for a smile. Yours would do quite nicely. Mwa ha ha ha

Jeannie the Therapist:
Jeannie Campbell is a Licensed Marriage and Family Therapist (MFC # 45366) in the state of California. She is Head of Clinical Services for a large non-profit in Humboldt County, and enjoys working mainly with children and parents.
Jeannie graduated summa cum laude from New Orleans Baptist Theological Seminary with a Masters of Divinity with Specialization in Psychology and Counseling and magna cum laude from the University of Mississippi with a double major in psychology and journalism. She has worked in a crisis pregnancy center, psychiatric hospital, drug rehabilitative program, several non-profits and homeless shelters, a foster family agency, and in private practice.
Jeannie the Writer:
Jeannie has been writing ever since she received a diary for her fifth birthday. She began writing angst-ridden middle-grade novels in junior high, often commandeering the family computer for hours on end. After eight years of higher educational pursuits, she moved onto adult contemporary romance and romantic suspense, frequently using her day job as a therapist to generate lots of fodder for her night job as a writer.
Two of Jeannie’s “therapeutic romance” manuscripts have garnered the high praise of being finalists in the Genesis Contest for unpublished writers, sponsored by the American Christian Fiction Writers (ACFW), of which she is an active member. She writes a popular monthly column for Christian Fiction Online Magazine and has been featured in many other e-zines, newspapers, and blogs.

What is Character Therapy? From her website:
Character Therapy is what I do when I use my professional training and experience as a licensed clinician to evaluate and diagnose fictional characters.

How can you—a published or aspiring writer—benefit?
1) Write characters more realistically.
Using a search engine to find out information about a mental disorder yields a very different result than asking a therapist who has treated those same problems in real life. Instead of getting a bunch of stale facts, I can help you breathe life into your characters while taking into consideration your unique story world.


2) Plot more feasibly.
Plotting the external conflict around your character’s internal conflict is essential to create tension on every page. Understanding the character’s driving goals and motivation in relation to their emotional state will help you figure out what plot points need to occur to maximize the character’s arc to its fullest potential.


3) Avoid clichéd or incorrect depictions of mental disorders.
My passion is helping those not afflicted with mental disorders understand those who are. Since one in four adults have a mental disorder, the likelihood of one of your characters having one is pretty high. But you want every nuance to ring true about the character, not feel cardboard cutout or stereotyped. So pick my brain instead of yours to avoid pitfalls of re-writing later.
Have I piqued your curiosity?  Think your characters might benefit from some couch time?

Jeannie Campbell, LMFT
the character therapist
And I had to show you this: Elizabeth Mueller  did this. Is she talented or what? 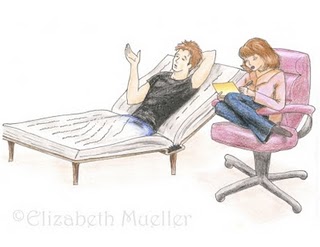 Jeannie will give away a copy of her Writer's Guide to Creating Rich Back Stories. So do a comment and she'll do a giveaway. Jeannie is here if you have any questions. So?? :-) Ask away people. Ask away.

Posted by Robyn Campbell at 7:18 AM