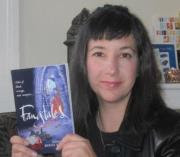 Please welcome my pal and yours, the wonderfully (oops, naughty adverb there) talented author, Theresa Milstein. I am privileged to be on her Fangtales blog tour.
Thanks for interviewing me, Robyn.
Tell us about your story in Fangtales:
Fangtales is a YA vampire anthology that had the criteria to be as true as possible to the rules in Bram Stoker’s Dracula.  I had to do some research to see what that meant before writing my short story.
My short story is called “Allured”.  Shalom is a new student who has been trying to snag the most popular boy in her high school.  A couple of people in her new town have been murdered, one in a graveyard.  She’s trying to convince this popular boy to visit the graveyard with her.
That’s all I can say…
How did you get the idea for it?

I got my idea with a sentence or two.  That’s usually how it starts.  I don’t know more than that.  Often, I don’t know the ending until I get there.  I just have this vague sense of where I’m going.
Here’s the edited version of the beginning, which is pretty similar to my rough draft:
“I twisted a golden curl in my usual alluring way. Guys loved it when I did that. I lowered my voice, so Reid had to lean in to hear me, his elbows propped on his knees.”
After I wrote those lines, I had to figure out what she wanted and why.
How did you feel when you got the email saying they accepted it?
This was my first accepted short story, so I was thrilled.  I submitted the story last fall (just about a year ago).  The decision was supposed to be decided in the winter, but got delayed until spring.  After writing for five years, it felt good to be validated.  I wish I’d tried to write short stories sooner because I’ve gotten three of my three short stories accepted into anthologies.  If only I had that kind of success with my novels. (Note from Robyn: she will, she will!)
Tell us about your other publications.
After I submitted “Allured”, I heard about a call for stories to be included in an anthology to raise money for flood victims in Australia.  The criteria:  stories should be upbeat.  In my story “Daisy”, Debbie plucks the petals off a daisy to decide whether or not to tell her boyfriend a secret. I was worried it wasn’t upbeat enough, but it was accepted. 100 Stories for Queensland was published in May.
The same editor who put together, 100 Stories for Queensland is the editor for Literary Mix Tapes.  She invited me to submit a story for an upcoming anthology, Tiny Dancer.  All of the stories are to be speculative fiction, inspired in some way by Elton John’s song “Tiny Dancer”.  My piece is about being a futuristic society that upholds a twisted version of the 1950s idea of domesticity.  Girls aren’t allowed to be traditionally educated and need to win beauty pageants in order to snag a good husband when they come of age.
All of my three short stories have a twist, which I hope the reader isn’t expecting.
Thank you Theresa for stopping by today. You know I heart you, girlfriend.  People please. Go buy it! Smooch!
Linkage peeps:
Theresa's place:
http://theresamilstein.blogspot.com/