February 27 through March 9 everybody's favorite ninja Alex J. Cavanaugh is on tour! Let us help our pal along and support his going and coming. Anyone who comments on his blog posts during this time can win a special package from Alex's publisher: copy of CassaFire and CassaStar, a large tote bag, and a mug. Come on peeps! You know you want them. The party is even over at twitter!  Hashtag for the party is #CatchFire, of course!

I met Alex after I took the blog book tours class. Which btw, was awesome! Anywho, he's an alumni and now so am I. This ninja dude is well respected in our blogging circle and I want us all to keep this party going!


Here are the goodies that await you my pretties! 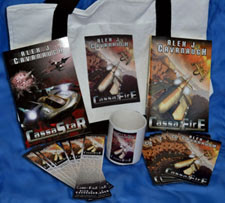 I want to tell you that I love Alex's writing and cannot wait to get my grubby little hands on CassaFire. Look at that cool cover! Here's a little preview:

CassaStar was just the beginning…
The Vindicarn War is a distant memory and Byron's days of piloting Cosbolt fighters are over. He has kept the promise he made to his fallen mentor and friend - to probe space on an exploration vessel. Shuttle work is dull, but it's a free and solitary existence. The senior officer is content with his life aboard the Rennather.
The detection of alien ruins sends the exploration ship to the distant planet of Tgren. If their scientists can decipher the language, they can unlock the secrets of this device. Is it a key to the Tgren's civilization or a weapon of unimaginable power? Tensions mount as their new allies are suspicious of the Cassan's technology and strange mental abilities.
To complicate matters, the Tgrens are showing signs of mental powers themselves; the strongest of which belongs to a pilot named Athee, a woman whose skills rival Byron's unique abilities. Forced to train her mind and further develop her flying aptitude, he finds his patience strained. Add a reluctant friendship with a young scientist, and he feels invaded on every level. All Byron wanted was his privacy…

Grab the popcorn and we'll watch the trailer:

Available today!
Science fiction - space opera/adventure
Print ISBN 978-0-9827139-4-5, $15.95, 6x9 Trade paperback, 240 pages
EBook ISBN 978-0-9827139-6-9, $4.99, available in all formats
CassaFire is the sequel to Cavanaugh's first book, CassaStar, an Amazon Top Ten Best Seller:
…calls to mind the youthful focus of Robert Heinlein's early military sf, as well as the excitement of space opera epitomized by the many Star Wars novels. Fast-paced military action and a youthful protagonist make this a good choice for both young adult and adult fans of space wars. - Library Journal
You know you gotta have this!  I am so excited. Alex's writing is brilliant. You will definitely be transported, my friends. The world building is awesome.
You can visit Alex's site at http://alexjcavanaugh.blogspot.com/
Barnes and Noble - http://www.barnesandnoble.com/w/cassafire-alex-j-cavanaugh/1034742568
Amazon - http://www.amazon.com/CassaFire-Alex-J-Cavanaugh/dp/0982713940/ref=sr_1_1?s=books&ie=UTF8&qid=1329417150&sr=1-1
Amazon Kindle - http://www.amazon.com/CassaFire-ebook/dp/B007A2TSNG/ref=sr_1_1?s=digital-text&ie=UTF8&qid=1329663355&sr=1-1
Posted by Robyn Campbell at 2:06 AM